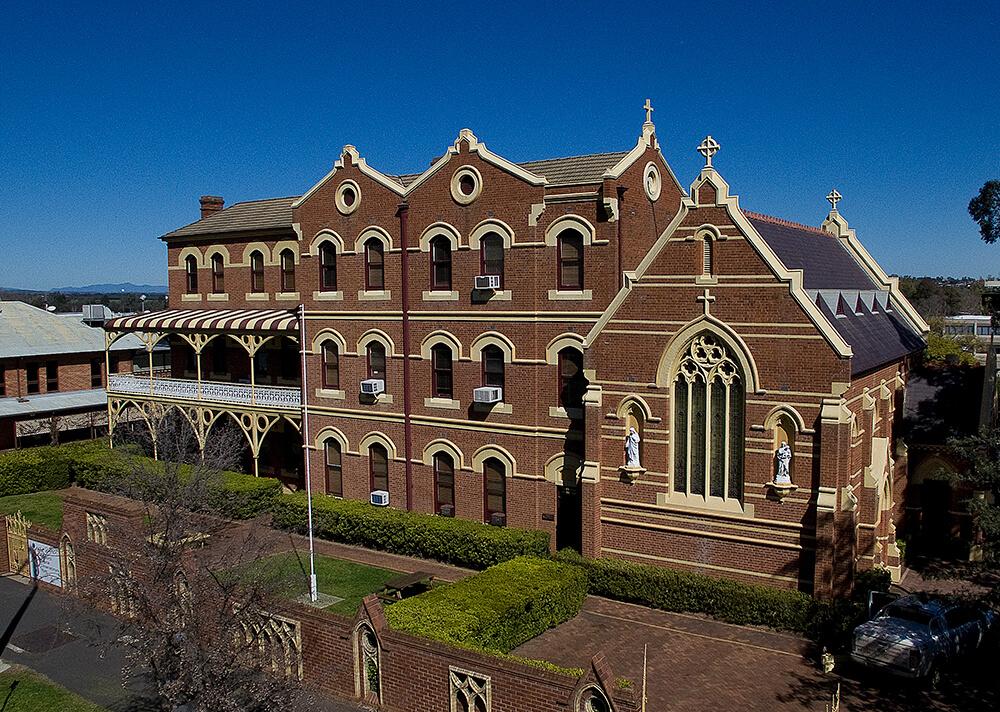 Originally build as a convent, our premises was originally designed to accommodate nuns on the ground and first floor with a dormitory for boarders on the top floor

In 1876 four Irish nuns, accompanied by Rev.Fr Michael Foran set out from Maitland to establish a teaching order in Tamworth. The transept of St Nicholas’ Church initially served as a classroom.

The Dominican Convent Building was built in 1880 – 82 of exposed variegated brick laid in English Bond, of three stories and in a free gothic style. The roof was originally galvanised iron. The balconies feature cast iron columns between which are long bent timber brackets meeting to form in effect pointed arches which impart a strong ecclesiastical flavour to the building. In the open spandrel to each arch is an infill of a timber ring in four segments.

The convent building was originally designed to accommodate nuns on the ground and first floor with a dormitory for boarders on the top floor.

Extensions to the original building were made in 1903-04 and the Chapel opened as a memorial to celebrate the golden jubilee of the profession of Mother Mary Regis, who was the first Mother Superior.

The school grew and comprised the entire site now occupied by the K-Mart complex with the exception of a small parcel of land at the intersection of Peel and White Streets.

In the 1970’s the convent was in a deteriorated condition after the closure of the school, the land was sold for the development of a K-Mart complex, and the building was marked for demolition.

A group of local citizens, recognising the historic significance and potential of the old convent, began strenuous efforts to have the building retained. The National Trust was alerted, and the building was classified, which authenticated the claim of its significance. While classification gave official recognition to the heritage value of the building, this alone could not have prevented its demolition.

Representations were made to the Heritage Council of N.S.W., a statutory body responsible the Minister for Planning and the Environment, with the power to impose interim and permanent conservation orders. The Heritage Council put in place a Conservation Order on the Convent, the Chapel, and the fence, describing the complex as “magnificent”. Ownership of the site was transferred to the Minister for Planning and Environment.

The Public Works Department then undertook the construction phase of the project. The restoration involved some skill not commonly used today. These included matching the elaborate timber mouldings, architraves and doors and the painting of stencilled designs on the walls. The external façade of the building was cleaned and all painted surfaces were repaired and painted using the original colours. The total cost of the restoration was $620,000, a modest amount compared with the cost of building such facilities from scratch.

In 1993 the Public Works Department vacated the building and ownership of the building was transferred to the University of New England.

The Tamworth Regional Conservatorium of Music leases the building for a peppercorn rent, but is totally responsible for the maintenance of the Building.

In 2003 – 2004, the Conservatorium undertook major repair work on the stained glass windows in the Chapel. The windows were removed and transported to a workshop in the Kangaroo Valley where they were cleaned, broken glass replaced, re-leaded and rebuilt prior to being returned to Tamworth. In 2003 restoration and refurbishment of the Chapel roof was undertaken and part of the exterior of the building was repainted. In 2006 the exterior painting was completed.

In 2007 a renovation of the Chapel was undertaken involving the relocation of the stage, upgrading of the lighting, painting, new chairs and the purchase of a new grand piano.

The Conservatorium is a marvellous example of the rehabilitation and adaptive reuse of a threatened heritage building.  It is now a valued asset to Tamworth and the region in keeping with its history and heritage.